The other day, I commented that you can’t avoid making a choice by just not choosing — “not choosing” is the same thing as choosing to stay in the same state as you were. And I remarked that if you can get past the intial â€œbut I donâ€™t want to choose!â€ moment, and move onto actually evaluating the decision in front of you, it can be enough to get you off the fence and into a decision.

The real question is, why do we find it so easy to create a third option — “stay in the same situation” — instead of simply picking one of the alternatives we were initially presented with? People have identified dozens of reasons, but they can all really be very simply summed up as inertia and/or fear. 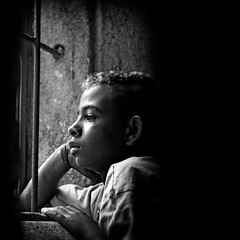 Inertia is the resistance of an object to a change in its state of motion (Wikipedia). You may have heard, “an object in motion tends to remain in motion; an object at rest tends to remain at rest.” The same is true of people — we tend not to change, unless there’s a sufficient impetus to cause the change.

Choices always really boil down to two initial options: the option to choose to do something different (what that is may be the subject of a secondary decision) or the choice to continue as you were previously (the common “doing nothing”).

How resistant you are to change often relates to your ability to imagine a positive outcome resulting from your choice to do something.

Our brains are able to come up with (simulate) expected outcomes — it’s how you know that you would prefer to go to Disney Land instead of to jail, for example (at least, I would prefer it that way!).

But small choices tend not to have expected outcomes that are all that different from each other. Take, for example, myÂ book purchase decision example. Either choice I make have almost identical expected outcomes: I will read the book, and either enjoy it or not (both books are equal in my expectation), and it will go on my bookshelf until I choose to read it again.

Not only that, but my expected outcomes for the books are not that different from what would happen if I didn’t purchase either book. Maybe it’s the pessimist in me, but I’m not anticipating either book will cause me to create a major change in my life. My experience is that such a thing would be out of the ordinary for me, and while I may be wrong, it’s just not part of my expected outcome.

In my case, the expected outcome of purchasing one of the books would not be not sufficient impetus (in and of itself) to overcome the tendency to not change. The result being that my inertia holds me in one place — I choose to not effect a change (purchasing the books) because subconsciously (and now, consciously) I do not expect that purchasing either book will drastically change my future self in a positive (or negative) way.

Another major reason we resist making decisions, both large and small, is because of fear.

We are all aware that our mental simulators sometimes get things wrong; that an imagined outcome may not match an actual outcome. Â Now, depending on how confident you are that your imagined outcome will actually come to fruition, you will be more or less likely to choose that outcome.

The reason is that, as we become less confident in our imagined outcomes, we become more afraid that the outcome will not be as we imagine, and that we will have made the wrong choice.

So what constitutes a “wrong choice” in our minds? In general, we can break our fears down into two main categories:

Fear of Negative Consequences – Negative consequences are the other big reason that people fear making decisions, and it’s closely related to imagined outcomes.Â A negative consequence could be something minor — such as missing out on a few dollars — or major — like death or dismemberment. Â It isÂ the type of fear that we’re most used to think of as causing choice-paralysis.

These fears tend to pop up most often when we’re not confident in our imagined outcome (or maybe, we are confident, but our confidence is that the imagined outcome will be negative!). The problem is further compounded because human beings are notoriously poor at estimating odds — so we’re not very good at judging the likelihood of one outcome over another.

Fear of Lost Opportunity – This happens when we believe that making a certain choice for something automatically means choosing against all other options. It’s also related to imagined outcomes, because while you’re confident that you would be happy with choice A, you’re not confident that you wouldn’t beÂ moreÂ happy with choice B or C.Â For example, if you are having a hard time choosing a major in college, it may be that you believe that picking a Biology major means you can’t also be an Art major.

For those of you who identify yourselves asÂ “scanners“, this type of fear probably sounds familiar. A hallmark of a scanner is feeling as though you have so many options and choicesÂ and you want to do them all! It’s not uncommon to feel as though you would be giving up so much by choosing just one option, and so you prefer not to choose (and “leave all your options open”).

All of these factors — inertia, fear of lost opportunity, and fear of negative consequences — have varying amounts of impact on our willingness to make a choice, depending on the situation. At the same time, they are all interrelated with each other, because they all have to do with our ability to imagine outcomes.

One thing that we tend to not take into account when imagining outcomes, though, is this:

Simply making a decision will make you happier.

In other words, your brain will determine that whatever you pick will be the “right choice” — regardless of negative outcomes or consequences. It may seem to everyone else that you made the “wrong decision”, but your subconscious has the ability to make you truly believe that you’re better off with the choice you made.

Even more, if you commit to that decision (whatever it is), and don’t give yourself a chance to reverse directions / change your mind, you will be happier than if you have a chance to change your mind later on.Â This seems counterintuitive; after all, it seems as though we ought to be happier if we know we can change our minds at any time. But study after study has shown that you’ll be happier with a decision when you’re “stuck” with it.

What’s particularly cool (and maybe surprising) is that this synthetic happiness that comes from making a choice is just as real and enduring as happiness that happens “naturally” — when you get something that you know you want, for example.

So with that in mind, what we really ought to be doing is just choosing anyway, because no matter what we decide, our brains have the ability to make us happy with our decision. It is also whatÂ prompts personal growth; while inertia and fear make it easy to stay the same all the time, it is the process of decision-making that causes us to grow and change.

Back to the Books

So, going back to my book-buying decision from the other day. Since buying either book is likely to have an equivalent outcome, and neither are unlikely to cause me any lasting unhappiness, logically I should just be able to make a choice. In fact, I simply can’t go wrong, because ultimately, whichever one I choose will be the right choice!

When it comes to making a choice, then, the key is simply to choose. Flip a coin if you have to. Rather than agonizing over potential outcomes and best decisions, understand that because of how your brain is wired, whatever you choose will be the right choice. As Nike has made famous, “Just Do It!”

Which means, I’m going to be picking up a book in the next day or two (providing it gets up above -40 with windchill) — and I may throw out the receipt so I’m stuck with my choice, too.Â I’ll let you know which one I choose!