In today’s world, the word “New Year’s” is nearly synonymous with “resolutions”. For some reason, the beginning of a new calendar year draws out the “this year, I want to do X” in so many of us. 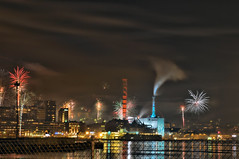 Maybe its that the party season (and thus all of its goodies and sweets) are behind us, maybe its because it marks the beginning of a new business quarter or new semester, or maybe its just commercialization (all those diet books and gym memberships!) — whatever the reason, when it comes to the start of the new year, “resolutions” seem to be the words on everybody’s lips.

Set Up to Succeed, or to Fail?

But maybe you, like many others, look back on the year that was, and see a list of failed resolutions and things that didn’t get done. As the New Year approaches, you might be inclined to just say “screw resolutions, they don’t work for me anyway”. Or perhaps, by the time you’re reading this, it’s June. 6 months have passed, and you’ve gained 5 pounds instead of lost the 10 you wanted to get rid of in January.

It seems that the word “resolutions” in our society has almost become thought of as little more than a synonym for”guaranteed failures”. There is a cultural meme, propagated through media and everyday conversation and experience, that a huge majority of resolutions are, by their nature, bound to fail.

One must wonder, why would you put yourself in a situation where you’re expecting to fail? Not only do you give yourself an automatic out if (when) it doesn’t work, but you’re really not giving yourself a fair shot at success.

It’s particularly interesting when you consider the types of resolutions that people set: to stop smoking, to lose weight, to be kinder, to work less, etc. All of these things are good things to want! They are all desireable, and good things to have or to do. They all represent positive life changes, and opportunities for personal growth and development. So why make resolutions about these great things, if we believe that resolutions are bound to fail?

Resolve to Set Goals, Instead

If vocabulary is part of what holds us back from creating the life that we want, then the first step is to change our vocabulary.

In other words, if you want to at least give yourself a fighting chance to create the life you want, to make positive life chances, and to nurture opportunities for personal growth and development, stop making resolutions.

Psychological research has shown time and time again that the conscious and unconscious mind has enormous power when it comes to shaping our perceptions of the world — both emotionally and logically. In Shakespeare’s play Hamlet, the title character says this very well: “there is nothing either good or bad, but thinking makes it so.”

In other words, resolutions in and of themselves aren’t inherently good or bad, nor are they inherently bound for success or failure. But because we think we are more likely to fail to complete a resolution than to succeed, we set ourselves up for that eventual outcome! We believe that we will fail, so we don’t work as hard to succeed.

It works the same way as if I were to tell you, “don’t think about chocolate cake.”Â  What did you think about?Â  A gooey, moist, beautiful chocolate cake, maybe with a chocolate ganache and some strawberries and whipped cream on top. But wait, I told you not to think about it!

So if you’re looking for a tip about making resolutions that work, the best tip is simply this: make goals, not resolutions. A simple change in vocabulary can make all the difference in the world. Culturally, we have a better opinion of goals, so simply by reframing the situation, we are more lined up for success.

You may have heard of the SMART model for goals. It’s actually an acronym borrowed from business, which basically states that any goal you make should have the following criteria, in order to give yourself the greatest chance for success. Each letter in the word stands for an aspect of goal creation that, when taken all together, can make goal completion far easier.

S: Specific. “Lose weight” is not specific; “lose 10 pounds” is. “Save money” is not specific; “a 3-month emergency fund” is. “Be healthier” is not specific; “eat a serving of fruit every day” is. If you give your goals more specificity, you’ll know exactly what it is you’re going after, which means you’ll also have a better idea of what steps are needed to get there.

M: Measurable. Set a target: 10 pounds, 3-month emergency fund, 1 serving of fruit per day. All of those targets can be measured, so you know whether you’ve hit them or not. If your goal isn’t measurable, you’ll be like a ship at sea without a rudder — sailing and sailing, just hoping that eventually, you’ll hit land (but never knowing whether you’ve arrived, or not!).

A: Achievable. There’s no point in setting a goal that isn’t feasible and actionable. I could set a goal to be 2 inches taller, but what’s the point of that? There’s nothing I can to do achieve that goal; no action I can take to make it happen. Instead, make goals that involve specific action steps you can take. By making yourself the person responsible for your completing goal, you have a better chance to succeed since (if you don’t) there’s no one to blame if you don’t. Making achievable goals also affects how you state the goal: instead of saying “I want to do X”, say “I will do X”. It makes you feel more in-control of your situation, and helps you believe you can do it.

R: Realistic. There’s also no point in setting a goal that you don’t believe you can complete. Otherwise, you have the same problem as we did with resolutions — you don’t believe you will be successful, so you automatically gyp yourself of your best chance to be successful. You may want to run a marathon, but if you can’t dedicate time to train and physically prepare, you won’t be able to.

T: Time-Bound. The ultimate failing of resolutions is the ultimate success point of SMART goals: the time-frame. A good goal will have a definite timeframe for completion: Lose an average of half a pound every week, for 8 weeks. Eat one piece of fruit every day, for 30 days. Put at least $200 into an emergency fund by the last day of every month. The benefit of setting a time-bound is that at the end of the period, you can reflect on how you did — your successes and your failings — so that you can do even better the next time.

Believing is Half the Battle

If you notice a theme in these five aspects of good goals, you would be right: they all have to do with the way you mentally set-up the goal. Again, it comes down to the mind’s ability to impact our effectiveness and our reality. You see what you choose to see, you act the way you choose to act, and you believe the way you choose to believe. Ultimately, it is your power and choice that makes you ultimately responsible for the success or failure of your actions.

Now, I realize that just simply changing your vocabulary from resolution to goal on its own isn’t likely to be enough to get you over your New Year’s hump. There still is the matter of actually following-through on said goal. The key thing I want you impart to you today, though, is not to simply dismiss the power of the mind when it comes to setting yourself up for success.

Tomorrow, I’ll give you a list of practical tips and tricks for getting from “goal” to “accomplished” — so your homework is to spend a few minutes thinking of resolutions that you’ve set in the past (or maybe that you wanted to set for this New Year’s Day!). Take a bit of time to consider how you could transform those vague resolutions into SMART goals. When we meet again, we’ll look at ways you can turn those resolutions into goals, and those goals into reality.